You are here: Home / Sir George Simpson and the Remarkable Story of the Hudson's Bay Company 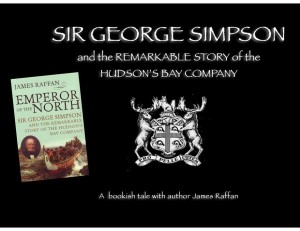 James’s research into all of his book topics takes him always into the Archive of the Feet, which means onto the ground and into the experiences of whatever or whomever he is writing about.  This was particularly the case as he entered the life of Sir George Simpson, the highly successful CEO of the Hudson’s Bay Company through the golden years of it’s operations in the 19th century.  James found his way to a host of significant fur trade locations throughout North America, often by canoe but for this project he also travelled throughout Scotland and the Northern Isles.  The result was a best selling book and the finding of a rare canoe-related artifact that eventually made its way to the collection of The Canadian Canoe Museum.   This is a story about Canada, Britain and one of the fur trade’s most notorious characters but it is also a story of a writer’s passion for discovery.

Peter Newman’s review – The Adventurers Are Back »