You are here: Home / Arctic Moments 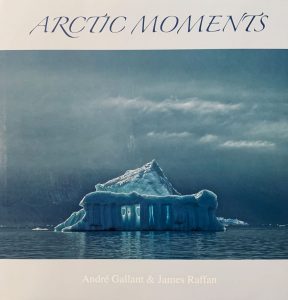 The slow dance of words and images that became Arctic Moments began when André and I shared an Arctic sea voyage hosted by Adventure Canada. Under the rubric of the “other duties as assigned” on the journey, besides giving lectures and workshops on our passions for interpreting landscape experience through writing and photography, we were asked to collaborate on generating content for the company’s social media feed. But with all there is to see and do on a voyage of discovery such as this, and with the two of us often on different schedules, there was barely time to breathe, let alone sit down and discuss what we might assemble for satellite uplink to the home office each night.

So we worked out a collaborative scheme that turned out to be semi-clandestine and incredibly fun. At the end of a day’s excursions, André would retreat to his cabin to edit the day’s images. While he was doing that, I would be tending to my duties as a Zodiac driver, or preparing lectures, visiting with passengers, or doing any number of other tasks that separated me from André. Eventually I would find my way to my cabin where I would find a flash drive on a blue Adventure Canada lanyard containing selected images from the day hanging on the handle of my cabin door. Very secret-agentish. And the last thing I would do before retiring would be to open this little treasure trove on my computer, see the day through André’s eyes, and write something in response to the always stunning and often surprising images before shipping these little word-picture packets into the ether via satellite.

It was a strange back-and-forth, to be sure, because André never really got to see the words that went with his images and, oddly perhaps, because the ship we were on was not all that big, with all that was going on we rarely got the chance to talk about our collaboration. But when we did, it was a most enjoyable, and often strangely intimate conversation. André’s eye was drawn to things that in many instances were invisible to mine and vice-versa. But what a joy it was mapping my sense of the day onto or into André’s always arresting visual capture of the biggest vista or the most fleeting visual expressions of landscape or life on an Arctic expedition. And so when you secret collaborator on this Adventure Canada journey approached me with the idea of continuing this collaboration, Arctic Moments was born.

If you’d like to purchase a copy of Arctic Moments then please drop me a line.