You are here: Home / Blister, Blogs and Bent Canoes 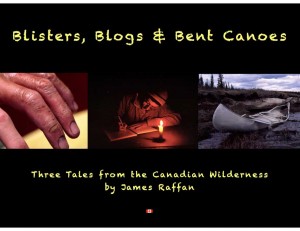 Originally prepared in response to an invitation to speak at the Kendal Mountain Film Festival in England’s Lake District, this presentation presents three of James’s best stories from a lifetime of work and adventure in Canada’s north.  The first is about an assignment from National Geographic in Northern Quebec in which chafing between   the guide and expedition photographer led to funny antics, near death experiences and eventual reconciliation.  The second story is set in the barrenlands of the NWT and Nunavut travelling with a Chipewyan wolf hunter attempting to understand how the land acts as a teacher.  And the third story, in the “broken canoe” category is actually the amazing tale of a two kayakers being frozen into the ice of the Mackenzie River Delta, being airlifted out of their trapped tandem folding boat, and the miraculous eventual return of their lost kayak.  It’s a fun talk with lots of messages of luck, chance, persevence and the importance of making the best of bad circumstances.