You are here: Home / Circling the Midnight Sun 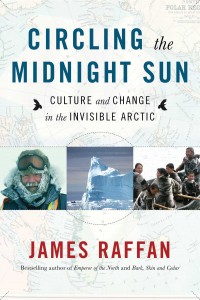 Circling the Midnight Sun was released in September, 2014.

In Circling the Midnight Sun, James Raffan presents a warm-hearted, engaging portrait of the circumpolar world, but also a deeply affecting story of societies and landscapes in the throes of enormous change.  Compelling and utterly original, this both an adventure story and a book that will transform the way we think about northerners and the north.

Praise for Circling the Midnight Sun:

“Start with a terrific idea: circle the globe along the Arctic Circle.  Add an adventurous writer who has the energy, grit, empathy, vision, and savvy to get the job done. Presto! After four years of slogging, you have Circling the Midnight Sun: informed, entertaining, and important — a one-of-a-kind work with a ringing message for anyone interested in the north, indigenous peoples, climate change, or all three. This is the book James Raffan was born to write.”

“Hidden truths.  Hard truths.  James Raffan’s sympathetic and insightful circumpolar voyage of discovery exposes the many challenges but also the opportunities that climate change is inflicting on the peoples and biosphere of the north.  There are important lessons for both northerners and southerners in the stories and observations that populate this book.  There are no easy answers for the challenges that face the north but Raffan, throughout his voyage, is certainly asking the right questions.”

“James Raffan has taken an unusual and difficult journey—around the world in Arctic latitudes. In doing so, he has visited a diverse sampling of what Canadian Inuit would call “ukiuqtaqturmiut”—the people of the Arctic, an agglomeration of races, languages and cultures united only by their residence in the globe’s northern-most countries and territories. This wonderful and informative volume has given voice to their stories— human stories— often lost or ignored in a world newly-enamoured of the Arctic but increasingly focused on the physical or economic aspects of climate change.”

Kenn Harper, author of Give Me My Father’s Body: The Life of Minik, the New York Eskimo and In Those Days: Collected Writings on Arctic History. Volume 1: Inuit Lives.

“How many time have I heard that “people have a fascination with the Arctic, but most will never be able to go there?” That’s no longer true, James Raffan takes you there, and in a way no one else has done. Exploring the vast differences in culture climate and landscape, contrasting places like Repulse Bay in the barren Canadian Arctic to the smokestacks and mining pits of Lulea in Northern Sweden, he showing how peoples throughout the circumpolar world are fighting to protect their cultures identities. In this remarkable book, a man who has spent a lifetime studying and travelling the Arctic now gives you a chance to go there—and you should.”

“To me it’s the most exciting region on the planet, and while we all talk about how it, the Arctic, is being affected by climate changer, how many of us have actually been there to find out first hand?  James Raffan has and he takes “being there” very seriously – just look at where he went.  Sir John Franklin would envy this voyage! But thanks to the trip, James answers today’s big Arctic questions and you may well be surprised at some of the answers.  Circling the Midnight Sun is a fascinating read.”

“By tracing one warm line through a land so wide and savage, James Raffan puts a human face on the circumpolar North.”

Michael Byers, author of International Law and the Arctic & winner of the 2013 Donner Prize