You are here: Home / Creator
Ice Walker: The Latest Book From James Raffan!
Ice Walker: A Polar Bear’s Journey Through the Fragile Arctic, September, 2020. Read about the book and praise for the book.
Go! 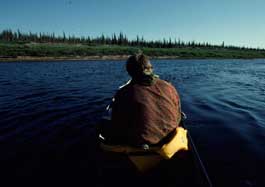 In spite of an uninspired career as an English student at John F. Ross High School in Guelph, Ontario, James began writing through journals that he started keeping as a teenager, through his travels with the Boy Scouts.

An early journal that has survived from those days is an account of a journey to achieve First Class standing as a scout.  For a 13 year old, this was a serious adventure from Friday after school until Sunday night that involved following a path in the rural areas to the north of Guelph.  The route was set out in a series of six digit topographic map grid references, each of which included an instruction (i.e. turn east here and travel for four kilometers) and/or a question or two, much like a scavenger hunt, that required careful observation and interaction with what was going on at each spot.

At one of the mysterious grid references between the ghost villages of Ennotville (home of Chicken in the Woodpile) and Speedside, the Scouter who had set up the journey (who obvious was well acquainted with everything happening on the route we were to travel) said that just north of the grid reference was an old mill on the banks of the mighty Speed River that an artist had purchased recently. We were to sketch the mill and, if possible, to call on the artist and learn a little bit about him.  The artist, as it turned out, was a really nice chap called Ken Danby who invited my travelling companion and me into his studio under construction in the old mill itself where we stood amongst works, works in progress, sketches, easels, paints, brushes, cans and the other scattered trappings of a busy artist.  As that first journal recounts, in answer to the Scouter’s questions and instructions I wrote:  “It was a grist mill built in 1857 by a man called Mr. Armstrong.  An artist lives here now called Ken Danby.”  And then, with the door open to a full first-hand description of the world world of one of Canada’s foremost realist painters, the journal continues with what I noticed next:  “He also owns a huge dog,” it says.  Read samples of this trenchant cultural analysis here. 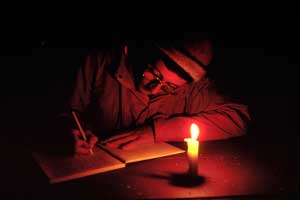 Silly or simple as that may sound, that journal started a hand-written and immediate record of travels that have stretched on (so far) for nearly half a century.

And that process—those journals—took a love of adventure, curiosity about people and a passion for the natural environment and wove them into a habit of mind and hand that have produced magazine articles, books, monographs, films, and radio documentaries.  It is not every writer perhaps who can track back their passion to a particular turning point or moment in space and time but that First Class Journey and that journal were where my passion writing and for storytelling began.

And it is for this reason that in my kit that goes to all journal-keeping and expeditionary learning workshops is that three-holed Hilroy, No. 990 Narrow Ruled Exercise Book that I bought at the Woolworth’s Store at in the stripmall at Speedvale Avenue & Stephenson Street in Guelph for $.19.

The Three Tenors of Stoney Lake | Among the fun pandemic pivot projects that have appeared in the gig vacuum created by Covid-19, was helping my sister, Helen Batten, who is the Musical Director of St. Peters Church on-the-Rock in Stoney Lake, to record enough preludes, postludes and hymns for a dozen planned virtual church services throughout the summer. At the last minute, before we loaded Helen’s boat to head to the island to set up to record, she realized that the church was still all closed up for winter. So she sent a Hail Mary (can non-Catholics do that???) email to two nearby volunteer/parishioners, Wade Strickland and Anthony Whittington, who came and helped (everyone social distancing, of course) but when they got the drift of what we were doing musically, they just had to sing a few hymns. Turns out the maintenance lads both had wonderful voices. The result is this fun little “viral” video.

Two Breaths | Very proud of this collaborative project that arose out of a workshop that the inimitable Dominique Souris (Co-Founder and Executive Director of Youth Climate Lab) and I cohosted in the summer of 2019 with youth on Students on Ice 2019 Arctic Expedition. With thanks to the SOI media team for taking a bunch of words scrawled on paper at the toe of the Croker Bay Glacier on Devon Island and turned them (poof!) into a affecting short film that opened climate talks in New York City in the fall of 2019.

The Canoe | Working with a very fine young filmmaker called Goh Iromoto to make this cinematically sumptuous celebration of our nation of rivers was an absolute delight. But it definitely had its moment of struggle, especially when it came to writing the script and articulating what it is, or why it is that canoes are so much a part of the Canadian experience. Goh, being a canny operator, took a good look at what I’d written and then, sitting in our front room here in Seeley’s Bay, one bright spring morning just started asking me questions based on the script, forcing me to abandon any notion of reading and just speak from the heart. The result of that is captured in this trailer for the longer film. This kind of creative collaboration with words and images stitched together with ideas and music is a joy and a privilege.

Books and other publishing projects:

Contributions in Others’ Books