You are here: Home / Deep Waters 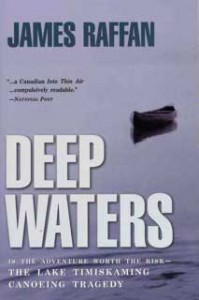 On the morning of June 12, 1978, 27 boys and 4 leaders from St. John’s School in Ontario, set out on a canoeing expedition from the wharf at Timiskaming, Quebec, headed for James Bay along an old voyageurs’ route. By evening the same day, all four canoes were overturned and floating aimlessly in the wind — 12 boys and one leader were dead. The rest huddled over a weak fire at the base of a cliff, waiting for the light of morning, and rescue.

So begins the story of the Lake Timiskaming tragedy, a tragedy that was quickly flashed around the world on the wire services and that struck fear into the heart of every parent. For who has not watched a child head off on an adventure with some misgivings? What is the right balance of safety and risk that we can live with? And does risk really build character as so many people believe?

Questions such as these are at the heart of Deep Waters, James Raffan’s moving and suspenseful story about a great wilderness adventure gone wrong. Raffan’s meticulous deconstruction of the circumstances leading to the accident is chilling: the hubris of school leaders whose motives may have been good-intentioned but whose practical knowledge was limited; the faith of the parents who played an integral role in St. John’s; the confluence of water and weather on a treacherous lake that fateful day; the lack of proper precautions for a trip that would have taxed even the most experienced of wilderness canoeists. Raffan slowly unfolds the web of events that resulted in such a tragedy and, with the hindsight of more than two decades, shows us what can be learned from such experience.

I am a former student at SJ school of Ont., 1983-85, was PM in 84-85. Trying to find info on the school and all I can seem to find is reference to your book. I should probably read it as I knew a few boys who knew some of the boys who perished. The few who have referenced the school offer mixed views as does my memories.