You are here: Home / Ice Walker 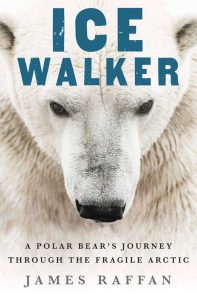 I’m so proud to be sharing news of a new book with you: Ice Walker: A Polar Bear’s Journey Through the Fragile Arctic. It’s definitely a departure from the style and tone of earlier books. Ice Walker is still set in the north but heads in a whole new direction. If it seems odd that a writer who began life as a marine biologist would be stretching the bounds of creative non-fiction with a story about a made-up bear, let me explain.

Back in the 1970s, as I was contemplating what I might do in graduate school, I found myself working in a university research facility where my job was to teach an adult male polar bear to press paddles on a fancy experimental setup that had been perfected to assess the spectral sensitivity of the bear’s eyes. I would shine a light into the bear’s eyes. If he saw the light, Huxley—the name given to him by one of my colleagues after his famous godfather, biologist Julian Huxley—would press a paddle with his nose to say, “yes.” If he didn’t see the light, he would indicate “no” by pressing another paddle in the other direction.

Day after day with that magnificent animal—who was slowly going berserk in captivity—led me to leave the pursuit of natural science in a lab setting. Instead, for over 40 years, I lived for part of the year among the northern peoples of Canada’s Arctic, traveling to circumpolar countries, appreciating other ways of life. In Churchill, Manitoba, I had my first interaction with wild bears.

After now more than four decades of living and learning throughout the circumpolar world, I have a keen sense that although science is a powerful tool, it is really just one way of appreciating our world. “Bearness,” if I might call it that, has many dimensions—narrative, nutritional, cultural, psychological, visual, aural, olfactory, spiritual, experiential, linguistic, functional, geographic. From spiritual to cultural to psychological perspectives, I’m wondering if bears and people are perhaps two sides of the same ontological coin.

When I set out to portray the life cycle of a female polar bear in southwestern Hudson Bay, the challenge was to find a voice and a genre that would invite readers to explore a spectrum of ways in which humans know bears and how bears know humans. The lingering scientist in me eschewed putting words in a bear’s mouth. It was important that these bears did not talk. It was also important for me to ensure that facts of the story—the natural and cultural histories of the bear, the oceanography of the Bay, the morphology and behaviour of the ice, the environment of Hudson Bay lowlands through the seasons—accurately reflected four decades of Arctic learning and experience.

All of what you will read in Ice Walker is “true” to the absolute best of my understanding of how polar bears and people coexist in Arctic realms around the circumpolar world and what they are contending with—what is at stake—as their worlds are shifting in response to anthropogenic climate change. Giving the bears names, physical characteristics and personality traits—all of which are drawn from existing and available bear scholarship and lore—was my means of inviting you to engage with the story and to enter the Ice Walker world long enough to ponder what we are doing to the earth, what we are doing to the bears, what we are doing to ourselves, and what might be done about all of that, before the world as we know it—the world enriched by northern peoples and bears—is gone for good.

Order your copy of Ice Walker

“Just as a polar bear slips between worlds, from solid ground to sea-ice and back again, James Raffan moves effortlessly between the tangible and the imaginative in this strikingly evocative, scientifically rigorous exploration of “bearness.” In journeying vicariously with a female polar bear through a world of flux, we see that no one and nothing exists in isolation, especially in the far north. Failing to recognize this reality more broadly will only accelerate our undoing; Ice Walker, then, is an act of defiance and hope. This is nature writing at its most intimate, compassionate, and exhilarating pitch.”

“I have never felt as intimate with another animal as I have with Raffan’s polar bear, Nanu. Raffan evokes her world – on land and ice, hunting, hibernating, giving birth, and raising cubs – with a sensory vocabulary that combines science and poetry to powerful effect. In so doing, Raffan initiates us into “bearness”, putting us, not just inside Nanu’s den but, almost literally, under her skin, where we become deeply invested in her life and fate, which is unavoidably linked to our own.”

-John Vaillant, award-winning author of The Golden Spruce and The Tiger.

“For most of my life, I have read stories of animals, stories that possibly made me who I am. My heroes have been the likes of Ernest Thompson Seton, who was able to get inside the skin of other creatures without anthropomorphizing. James Raffan’s Ice Walker is a worthy member of that tradition. As he captures the smells, sounds and feel of the Arctic, we become engaged and travel with Nanu and share her world. We care about her, her cubs, and her environment and end up wanting to protect those all the more. This book is important reading!”

“An unbearable truth shadows every page of this intimate portrait of a female polar bear and her rapidly changing world. Our reliance on fossil fuels has placed us all on thin ice, bears and humans together. James Raffan enlarges our sympathies with this quiet, unsentimental call to fellow-feeling and action.”

“An evocative and sensory trip through the Arctic, Ice Walker captures the beauty, the danger, and the expanse of the northern icescape while calling us to action to save the polar bear, the world it inhabits, and all they represent.  This is a timely book about the power of a mother’s love that transcends species. Nanu’s story will live in my imagination for a long time.”

“This is a great piece of Canadian literature. Raffan’s painstakingly simple and stark prose combine with an impressive firsthand knowledge of the landscape and its inhabitants to create a compelling and worrisome story that holds a powerful mirror of accountability up to us and what we are doing to this amazing planet.”

“For those who may never get to travel in the world of the Inuit and the polar bear, this is a marvellous read that conveys how things really are today in a world so crammed with unprecedented accelerating change and crises.”

“Stories touch us in ways that no list of facts can. James Raffan proves to be a master storyteller, bringing us an intimate saga of a polar bear’s three-year life cycle. Beautifully drawn with scientific accuracy and cultural sensitivity that comprehends the land itself and all its inhabitants, Ice Walker gives us a fresh sense of the reality of climate change.”

“In Ice Walker we literally get to spend two years walking in the polar bear’s shoes, so to speak, and through her eyes we see an Arctic that is changing, that the threats they face are our threats. I loved it so much, one read was not enough, so I read it a second time, and I look forward to reading it again to my boys.”