You are here: Home / Remembering Temiskaming 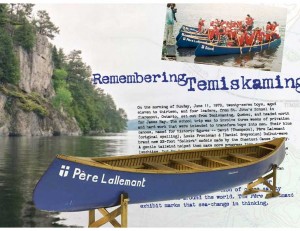 This presentation was originally prepared in conjuction with the writing and creation of an exhibit at the Canadian Canoe Museum of the same name that was developed around the appearance, 27 years after the Temiskaming tragedy, of Père Lallemant, one of the four 22′ blue Chestnut canoes used by St. John’s School for their ill-fated Junior Expedition in 1978.  It is a tale about how humans deal with tragedy and the sea change in thinking about educational risk and canoe safety that occurred in the wake of Témiskaming.

When on of the Temiskaming canoes turned up unexpectedly, James decided to make a radio documentary about the canoe and why one family might have asked for it and then kept it in a garage for 27 years before donating it to the Canadian Canoe Museum.  Listen to that documentary.  CBC Outfront: One Blue Canoe [audio:http://www.jamesraffan.ca/audio/CBC-outfront-One-Blue-Canoe.mp3]

As part of the documentary process, working with producer and musician, Paul Mills, James felt that words alone could not adequately convey the depth of the Greaney Family’s loss, so they wrote a song called “Last Place” to help tell the story of the big blue canoe.  Below, James sings that song in the storage bay of The Canadian Canoe Museum where the canoe, called Père Lallemant, is kept.