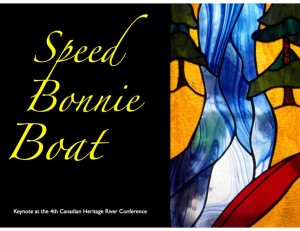 This presentation, developed originally as a keynote for the annual conference of the Canadian Heritage Rivers System, is James’s celebration of the river-as-teacher in his own life, growing up on the Speed River in southern Ontario but then moves on to a consideration of the place and importance of rivers in Canadian consciousness generally.  In this talk, he develops the idea of a national positioning code, based on watersheds, to replace the national postal code system and half seriously challenges audiences to think about the giving water and rivers a more prominent place in public consciousness in the decades to come.