The Captain and the Canoe: Kirk Wipper and the founding of the Canadian Canoe Museum

You are here: Home / The Captain and the Canoe: Kirk Wipper and the founding of the Canadian Canoe Museum 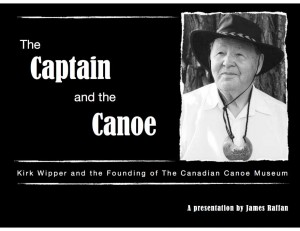 James Raffan first encountered Kirk Wipper and his passion for canoes and collecting at Camp Kandalore as 5-year old camper at Wipper’s summer camp for boys called Kandalore.  Although their paths diverged for several decades, James got reconnected with Kirk’s canoe collection after it had been moved to Peterborough and become the heart and soul of the Canadian Canoe Museum.  This presentation, developed in conjunction with a exhibit on Wipper’s life and the founding of the museum, is a tribute to Kirk’s life and to the people and circumstances in which world’s only museum wholly devoted to canoes was formed.